The place to find beautiful scotties 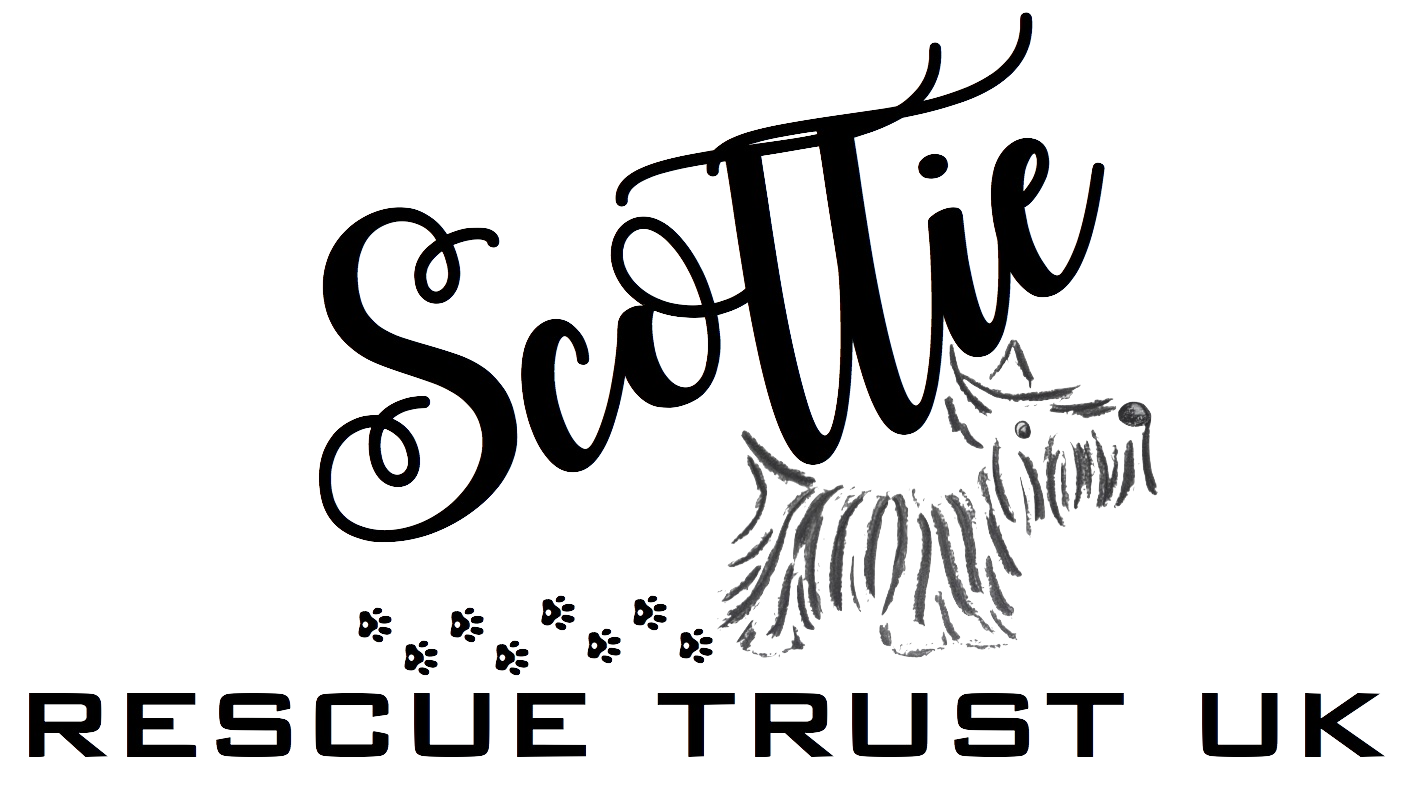 It didn’t take Trixie very long to be confident with me.

I kept her separate from my dogs for 4 – 5 days. She slept in a large playpen. Once I was satisfied that my scotties had accepted Trixie and that Trixie had accepted my scotties ‘within’ reason, they were allowed to mingle. This involved a period of 4 or 5 or so days before I was confident that they would all be ok with each other.

Since her integration with my scottie family, Trixie now sleeps in the bedroom with all my other scotties. She does however, still have her own playpen sleeping area so she is completely independent of the others but can sniff through the bars of her playpen and make ‘contact’ that way with my 3 younger scotties.

She sleeps for a vast majority of the day, but upon waking she must be taken immediately outside to see if she’s ready for a pee or poo. Sadly Trixie has not been properly house trained.

Initially I had a few problems recognising the ‘signs’ she gives when she’s ready to do her ablutions and overall since realising that she needs to be put outside immediately upon waking after a long sleep, there have been very few accidents in the house. If this does happen, it is generally through a lack of me noticing that she’s up and about.

We all retire around 11pm. Trixie is placed in her sleeping playpen (after being outside for a while) and will generally go straight back to sleep immediately. Unfortunately though, she has a tendency to wake very early in the mornings, sometimes around 5am. I have somehow managed to hear her wake up as her toe nails make a clicking noise on the plastic flooring underneath her bed, so I get up and take her outside. Usually she does something when placed outside. Initially I tried putting her straight back into her bed, but she didn’t like that and would cry and cry, even though we were all in the same room. Eventually it seemed that she was much better being taken into the lounge, together with my 3 younger scotties and they would then sleep until breakfast time with no problems at all.

As Trixie has to have her heart tablet 1 hour before food I have since made sure that I give her the heart medication when she initially wakes up. She then has her breakfast around 7am when all the others are fed.

Trixie was on a dreadful diet which we changed immediately. She is now on a high quality diet, the same as my own scotties, but her kibble is blended down to look like biscuit crumbs. Makes it easier to eat as she only has two lower canine teeth.

She must be fed separately in another room. Occasionally she will bark and bark if you are too slow at getting it ready!

She has the most bizarre way of approaching the food bowl. She will try and snatch or head butt the bowl – not sure why. I’ve learnt to ‘pretend’ to place it somewhere behind her to which she will move away, and then I quickly bring the bowl forward place it on the floor, just as she turns around to see where the bowl is. If there was a pattern on the bowl, then she would lick it off !!! She also seems to like licking the tiled kitchen floor, or wherever her bowl is placed – this can take about 10 or 15 minutes until she’s ready to move away. She’ll have a drink of water and then settle down for probably 5 – 6 hours.

She has two meals a day. She is on a prescription kibble diet, but because she doesn’t have any teeth, other than the two lower canines, I blend the kibble up so it looks like biscuit crumbs, but my blender always leaves a few intact biscuits – which doesn’t seem to affect Trixie

She has 30g of the kibble blend, and 50g of Nature Diet Lamb and I mix it all up. I also add in a scoop of “Protexin” to aid with her digestion as she came to me with diarrhoea – which has all cleared up.

We’ve been out a couple of times just to see whether this original observations were correct. I can confirm that Trixie has no road sense at all. Weaves all over the place but with regular outings she may start to learn.

Trixie has been checked regularly with my vet and they are not concerned with the heart murmur she has. The little cysts on her leg appear not to worry Trixie. So long as she still receives her heart medication tablet twice a day, she seems to be quite a health 13 year old. My vets have informed me that Trixie no longer needs the other medications she came with.

We give you all the observations we have noted whilst this scottie has been in our care, whether good or bad. We do not ‘hide’ anything for you to find out later. However, we can only inform you of the behaviours we encounter when they are with us. Any characteristics we have not mentioned, remain an unknown quantity that we cannot inform you. So we ask that when you embark on an activity with the scottie that has not been mentioned within this General Observation Profile, we ask that you do so with caution and patience and with a care to yourself and the general public. Please don’t think that because your other scottie ‘liked it’ that this scottie will also like it. Introduce the new ‘activity’ slowly and in a controlled and safe way, that way everybody concerned remains happy.

She tolerates my 6 scotties, but she can get a bit grumpy with them at feeding times – which is why she eats separately. Feeding times here are only twice a day, so it’s not too much of a ‘problem’ to bear, but one I feel should be mentioned. In between feeds she sleeps – soundly – for hours. She will be much better either in a household with one small dogs, or no dogs at all. Although Trixie does come with a few ‘issues’ she has been very well loved. You will have to be a little patient with her for the first month or so and not expect too much from her from day one. Human and dog alike, need to understand and adjust to each other for the right loving relationship to emerge.

If you have any questions/queries that we might not have covered here, it could be that we’ve not encountered that ‘query’ with Trixie, but if it is something that we can look into whilst she is still in our care, then please, do ask and we’ll do our best to give you a full answer.

In conclusion, Trixie is a sweet little scottie. She will cuddle up to you and she loves being stroked. She’s not too keen on being brushed though.